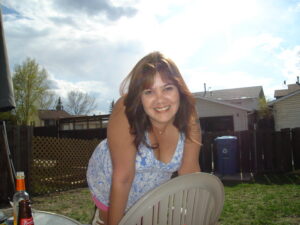 Bobbi Mercedes Byman unexpectedly passed on Friday, August 17, 2018 in Calgary at the Foothills Hospital at the young age of 48. Bobbi was born on November 30, 1969 in Winnipeg, Manitoba to late mother, Helen Cadotte. Bobbi shared two sons with Corey Thomas but had since married her soul mate and love of her life, David Byman on October 12, 2013 and gained two step sons. Bobbi is survived by her husband, Dave; oldest son, Jay (Melanie); youngest son, Steven (Amanda); five grandchildren, Kiara, Paige, Jeremy, Jayson and Peyten, whom she loved dearly; and step sons Jeffery and Trevor. She is also survived by her sisters, Dawna, Marlene and Annette; Aunt Susan and many cousins, nieces and nephews. The family would like to acknowledge Bobbis nephews, James (Candace) and Michael; niece; Brittanie; cousin Rick (Bev); “adopted sons” Jayme, Mitchell, Mark, Joc, Ryan, Sam, and Bryce; and life-long friends Robbie, Wendy, Andy and Jolene because even though everyone in Bobbis life was important, you played a special role in her life as well as theirs and they hope that it continues that way.

Bobbi held such beauty in her that shone brightly when she smiled. Her love was felt with every hug given. She gave selflessly and expected nothing in return. She instilled in everyone surrounded by her a sense of comfort, unconditional love and respect and with all the love she gave, she had twice as much love given back. Bobbi was the definition of family loyalty. Every person was welcome and everyone was her “son/daughter”. She would go above and beyond for anyone she called hers. Family, friends and others whose life Bobbi touched are invited to celebrate her life at the PIERSONS FOREST LAWN CHAPEL in Calgary on Thursday, August 23, 2018 from 1-5 PM. It is the families wishes not to hold a viewing, but rather a service and reception for gathering and support. Please direct any questions about the service to Melanie at 403-554-9806. It would be appreciated if others are willing to help with food platers for reception.

Bobbi would have been proud with the amount of support and love that has been shown to her family over this difficult time. The family would like to express their gratitude to everyone who has shown their support and offered prayers and in advance for any future support given. We are family and that is the way it will stay.