You are here: Obituaries / Bill Corbett 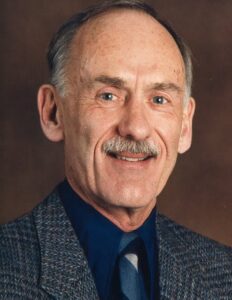 “I was born a WASP and it has taken a life-time to shed this bigotry. The personal theme in my teaching career was that we are all Gods children. In the last quarter of my life I have been privileged, when traveling and in ESL work, to know and appreciate several Muslims. And now one of my dearest friend is a Muslim. I have had a full, satisfying life. Although without siblings, I had a happy childhood with close cousins, friends and a dog. And a Dad who introduced me to outdoor life. A busy M.D.-G.P., he got me started on fishing, upland bird hunting, skiing, golf and tennis.

I have managed a few achievements. Marrying my special girl, Dora, with her parenting skills, financial skills, travel and cultural interests ranks first.

After 1 year in the Canadian Navy (1944-46), I gained a B.Ed. degree at the University of Alberta. I then taught English and Social Studies at Bentley (where I met Dora) and Sedgewick. Thinking of a career in applied psychology, I next put in a dozen year in personnel work in Toronto, Montreal and Calgary. However, I eventually realized that teaching was the right career. Between 10 years at Viscount Bennett and 10 at Henry Wise Wood high schools, I earned a M. A. degree at the University of Exeter (U.K.). It was a worthwhile year for each member of the family.

In the mid 1970s we acquired a property at Canmore. I improvised and built our second cottage using fire-burnt logs. Here we enjoyed 20 years of week-end skiing and entertaining family and friends.

At about the same time, I acquired a property from my brother-in-law, Fred Brooks, on Mitchell Lake in the Cariboo Mountains in B.C. Throughout 43 years, with the help of partner Gil Menzies, my sons and specific friends we have developed a glorious, exclusive (fly-in) resort. For me, it has been spiritually reinforcing. The addition of solar power – thanks to Tom & Rod – has made the summers there easier and pleasanter.

Dora and I have enjoyed numerous stage plays and movie operas. We played duplicate bridge at Nifty-Fifties. I downhill skied mainly at Lake Louise and Sunshine. I played tennis at Mt. Pleasant and Riverside clubs. I enjoyed rive-fishing mainly on the Waterton River.

An ultimate career satisfaction occurred when a male student presented an introduction to Dostoevsky and his novel “Crime and Punishment”: It was so effective that I could not have done better.

By either home-exchange, timeshare, or the Elderhostel program, Dora and I traveled to Australia – New Zealand, Germany-Austria, England-Scotland-Ireland, China, Alaska-Yukon, Mexico, Cuba. At age 80, I initiated and participated in a two-week work stint in Botswana, Africa with Habitat for Humanity. From the 80s to the early 90s, I have endeavoured to keep my brain going by assisting in E.S.L. work and writing 39 column for the Kirby News.

And then there are my sons Tom, Rod, daughter Sally, and Ken (who tragically died April 17th this year). They have been hugely devoted and supportive, there just arent words to express. Foster daughters Carol and Michelle have been very attentive.

It has been a full 92-year life and a rich 67-year marriage to Dora. Pinned to our kitchen wall is a miniature canoe with the legend: “An old fisherman lives here with the catch of his life.”

A Memorial Service will be held for Bill at Pierson’s Forest Lawn Chapel (4121 – 17 Ave. SE, Calgary) on Saturday July 28 at 10:30am. Interment will take place at Hillspring Cemetery at a later date.