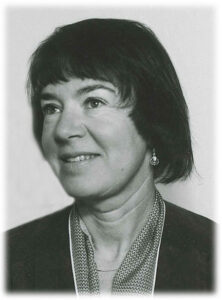 FISCHBUCH, Beverley Jean December 7, 1931 February 24, 2012 It is with great sadness that family and friends announce the passing of Bev at the Foothills Hospital in Calgary. She was predeceased by her mother Sybil (Swanston) Leonard in 1988 and her father Reginald Leonard in 1981. Bev earned her BA degree in anthropology at the University of Calgary, during the time that her four children were growing up. Bev grew up in Salmon Arm, British Columbia and always looked forward to her summers at Shuswap Lake. Firstly, with her children who came to love swimming with her and spending time exploring. Later, with her guidance, the grandchildren developed the same affection for our place on the beach. Whenever they came to see her, the first thing they would ask was, “Oh Grandma, when can we go to the lake!” Left to mourn her loss is her sister Tannis (Leonard) Karras; Norman, her husband of 54 years; her three sons: Brett (Marizel), Gregg (Gay), Mark (Kasia); and her daughter Kari (Allen) Miller. Also, there are her eleven grandchildren: Paul, Scott, Mary, Sarah, Josh, Brett, Erica, Mark, Robert, Michael and Kristen; and a great-grandson Myles, the son of Mary (Fischbuch) Moody. Bev was a guiding force in all our lives and always was there whenever we needed understanding or comfort. She will be sorely missed by all of us. Our sincere thanks goes to the staff at Clifton Manor who tenderly cared for Bev from December 2011 to February 2012. The nurses on Unit 82 at the Foothills Hospital patiently sought relief for Bev, and all of us, during the last six trying days of Bev’s life. A memorial gathering for Bev will be announced later. Messages of condolence may be forwarded to the family at www.piersons.ca.