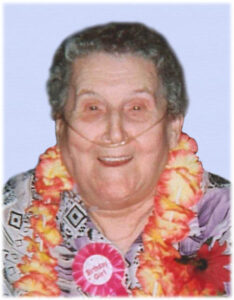 Bessie McLean passed away after a 50+ year courageous battle with MS on Friday, April 6, 2012 at the age of 79 years. She will be lovingly remembered by her children, Christopher McLean, Beverly, Wayne McLean, Dean (Lori) McLean, Betty-Jo (Joe) Hohmann and Jim Didyk; grandchildren, Christine (Christopher), Doug (Matsine), Ryan, Devan and numerous more; great grandchildren Nevaeh, Iyla, Malcome, and numerous more; siblings Gloria Ellerseik, Raymond Skinner, Gordon (Sonja) Skinner, Sheila (Lee) Gamache and Stan (Debbie) Skinner; and many more family and friends. She was predeceased by her husband Ronald, son Bobby, parents Bill & Margaret Skinner, brother Allan and brother-in-law Jack. Bessie was a mother and grandmother through and through. She loved her family more than anything else. Her second love was participating with the MS Society. A Visitation will be held for Bessie at Pierson’s Forest Lawn Chapel, 4121 17 Avenue SE, on Wednesday, April 11, 2012 from 6:00 8:00 p.m. A Funeral Service will be held at the same location on Thursday, April 12, 2012 at 11:00 a.m. with interment to follow at Rocky View Garden of Peace Cemetery. If friends so desire, donations may be made to the Multiple Sclerosis Society of Canada Calgary Chapter, #100, 2421 37 Avenue NE, Calgary, AB T2E 6Y7.