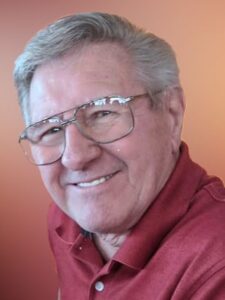 Barry was born in Yorkshire Sheffield, England to George Millington and Ethel Marsh. He obtained a Power System Engineering degree before immigrating to Canada with his young family. He also acquired a Red Seal Electrician Certification and worked for many years with The City of Calgary and later Universal Power Systems. After retirement, Barry worked at Walmart – a job he really enjoyed. In his spare time, he would go for walks (twice a day!) as well as do work around the house and tend to the yard. He had the greenest lawn on the block. Barry was a musician and played the guitar in his ‘rock band’. His favourite group was The Beatles. One of his quieter interests was studying genealogy. He would also do much genealogy work for his church and at the temple. He will be lovingly remembered by his family and greatly missed by many friends in his community.

A Funeral Service will be held for Barry at The Church of Jesus Christ of Latter Day Saints – Parkland Chapel (14540 Parkland Blvd SE, Calgary) on Monday June 20 at 11:00am.