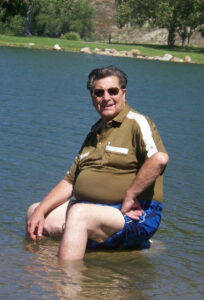 KROEKER, Barney July 6, 1944 – August 12, 2013 Barney Julius Kroeker peacefully entered the presence of his Lord and Savior, Jesus Christ, on August 12, 2013 after a brief but courageous battle with leukemia. He is lovingly remembered by his best friend and wife of 45 years, Bea and their four children and spouses: Petula and Brian Foley, Steven and Susan Kroeker, Duncan and Marcie Kroeker, and Dione and Steve Funk. Barney will also be remembered by his grandchildren Joshua, Caleb, Luke and Megan Kroeker; Keeley and Noah Kroeker; Unity, Ridge, Jordon, and Hayden Funk; step grandchildren Christine Burton; Laura, Amy and James Foley; and step great grandchildren Elise Sinclair and Grayson Burton. He is survived by his father Barney Kroeker and a loving extended family. Barney was predeceased by his mother Nettie, stepmother Mary, and granddaughter Hope. Barney was born on July 6, 1944 in Morden, Manitoba, the eldest of six children. He was raised in rural southern Manitoba and moved to Strathmore when he was 19 years old where he worked on a farm for four years. In 1967, Barney met and married Bea Dyck, and the two have rarely spent a day apart since. Barney subsequently obtained his mechanics license at SAIT and worked as an automotive mechanic at Renfrew Chrysler for 28 years until his retirement in 1996. Retiring with a purpose, Barney and Bea bought a motorhome and began volunteering with Roving Volunteers in Christ’s Service (RVICS), where he served others by providing maintenance work at various camps, reservations, schools, and orphanages. He volunteered faithfully for 17 years right until May 2013, when he became ill. His primary love was the Lord and that was evidenced by his service and his willingness to discuss with people God’s love and forgiveness. He enjoyed his family tremendously and was a great example to them of love, faith and commitment. Barney’s life will be celebrated on August 16, 2013 at 12:00 noon at First Alliance Church at 12345 40 Street S.E., Calgary. In lieu of flowers, the family requests that donations be made to Samaritan’s Purse Canada at www.samaritanspurse.ca.