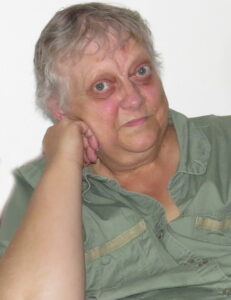 Barbara Gail Buist passed away in the late afternoon of September 4, 2020. She is survived by the love of her life, her daughter Mackenzie Leigh Allison Buist; older sister, Sandra (Ralph) Maitland and their children, Philip Maitland and Elizabeth Hamzah (Abbas) and their children Mila and Noah; brother, Murray (Karen) Sawatsky and their children Jeff (Lindsey) and Raeane (Justin) Mihalicz and their twin daughters, Hunter and Paxtyn. She was predeceased by her mother in February 2020 and her father in July of this year as well.

Barb was born on July 15, 1953 in Swift Current, SK, the youngest child of Cornelius and Eunice Sawatsky. She obtained her education at Ashley Park Elementary and O.M. Irwin Collegiate. Following graduation, she moved to Edmonton where she was employed by the TD Bank for ten years. In 1984, Barb moved to Calgary where she found employment with the Federal Government. She had many positions over the next 35 years and at the time of her passing was one of the few people qualified to perform her role.

A private family service will be held at a later date.