You are here: Obituaries / Audrey McDougall 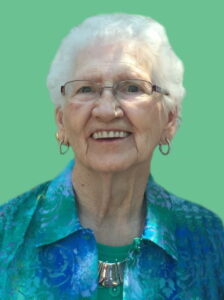 Audrey McDougall died peacefully in her home at Evanston Grand Village at the age of 88 years, with her family by her side. She is survived by her beloved sister, Bertha; her two loving children, her daughter Debra, son Cal and daughter-in-law Norma; her cherished grandchildren ; Adam McDougall, Layne McDougall (Mike Zak), Tara McGrath (Kevin Desmarais), and Meryk (Tim) Stephenson. In addition she leaves her precious great-grandson, Adam’s son, Boston, and several special cousins, nieces, nephews, great-nieces and great-nephews. She was predeceased by her husband Dalton in 1993, her brother Jasper in 2003, sister-in-law Evelyn in 2015, and Dalton’s three sisters Alzina, Marj (Herman) and Alberta. Audrey is the youngest of Merrick “Mayne” and Myrtle’s three children and was born in Travers, Alberta. Although the family faced many hard times, stories of her childhood were mostly about fun times with her brother and sister, many cousins, aunts, uncles and friends. Dalton and Audrey were married in Lethbridge in October 1950. Cal was born in 1952, and Debra followed in 1955, both born in Lethbridge. The family moved from Lethbridge to Blackie and then to Brooks before settling in Calgary in 1965. Audrey was inspired to become a nurse by seeing her father struggle with MS in the late 1930’s and, after graduating from Coleman High School she moved to Calgary to attend the Calgary General Hospital’s School of Nursing. She was a proud member of The Class of 1950 and went on to work at The General for 26 years, retiring in 1990. Audrey loved her work as a nurse but also loved times with family and friends – she and Dalton enjoyed camping, fishing and holidaying with the gang. And the deck of cards was never far away. Audrey loved to travel and was fortunate to have seen many parts of the world. She enjoyed numerous holidays – by car, bus, plane, and, her favourite of all, cruise-ship. In the last years of her life Audrey loved being with her children, grandchildren, and ‘special boy’ Boston. Audrey was diagnosed with Dementia in 2008. She handled her memory problems with humour, determination, and a ready smile for everyone. The family wishes to thank the caregivers and staff at Evanston for their patience and compassion over the past two and a half years and particularly for the tender attentiveness they showed in her end of life care. Please join us in celebrating Mom’s life at a Memorial Service held at Symons Valley United Church (38 Kincora Rise NW, Calgary) on Saturday, January 21, 2017 at 1pm, Reverend Vicki McPhee officiating. Arrangements entrusted with Pierson’s Funeral Service. In lieu of flowers donations may be made to The Alzheimer Society of Calgary (www.alzheimerscalgary.com).