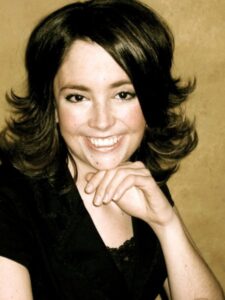 JOHNSON Ashley Lynn August 30, 1985 October 18, 2012 Ashley Johnson passed away suddenly on October 18, 2012 at the Foothills Medical Centre at the age of 27. She will be dearly missed by her parents Wayne and Jocelyn Johnson of Calgary; six brothers: Dustin and his wife Sara and their three children Anna, Lucy and Ezra, of Houston, TX; Brandon and his wife Michelle and their son Bennett of Vancouver, BC; Jordan who is serving in the Toronto Canada Mission of The Church of Jesus Christ of Latter-day Saints; Nathan at Red Deer College; and Connor and Kyle both at home in Calgary. Ashley is also survived by her grandmothers Fay Johnson of Cardston and Lorna Hintze (Ray), of Centerville, UT, and many aunts, uncles, cousins, other relatives and dear friends. Ashley was predeceased by her grandfathers Stan Johnson and Alan Van Orman. Our angel Ashley was born in Cardston, Alberta and raised in Calgary, graduating from Lord Beaverbrook High School. Music was a powerful force in her life. She completed a vocal academy program at Mount Royal College and a degree in music at Western University. She then served in the Salt Lake City South mission for The Church of Jesus Christ of Latter-day Saints. Following her mission, she returned home to pursue an Education Degree at the University of Calgary. Ashley was a hard working, determined, self motivated person while approaching any project, yet her interactions with people were gentle, sensitive, thoughtful and compassionate. Her beautiful voice and many other gifts and talents will be treasured forever. A Celebration of her life will be held at The Church of Jesus Christ of Latter-day Saints, Foothills Stake Centre, 30 Everstone Blvd SW, Calgary on Tuesday, October 23, 2012 at 11:00 a.m. Friends and family may visit with the family from 9:45 a.m. to 10:45 a.m. prior to the service. Following a reception, interment will follow at Eden Brook Memorial Gardens. Messages of condolence may be forwarded to the family at www.piersons.ca.