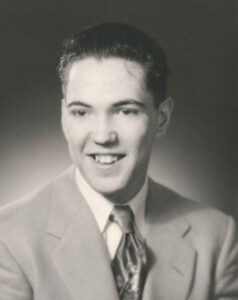 It is with heavy hearts that we announce the passing of Arthur “Art” Johnston, on October 25, 2015 at Claresholm, Alberta at the age of 80. He is survived by his daughter Valerie Thomas of Calgary, grandsons Christopher McLeod, Zachery Lastwika, Joshua Lastwika, Jason McLeod, granddaughter Virginia Bechtel, as well as 6 great grandchildren. He was predeceased by his wife Alice, his son Jeffrey and his daughter Jennifer. Originally from Flin Flon, Manitoba, Art moved out west with his family in his early years. He met the love of his life, Alice, while playing in a band. He fancied the violin and the sax, while Alice tickled the ivories. Art was a grounded man, some might say he was the salt of the earth. Incredibly loyal and dedicated to family and friends alike, he never did let anyone down. When kids and grandkids shared thoughts and ideas with Art, all the advice he would need to give would be a simple raise of an eyebrow. An avid outdoorsman, he shared his love of nature with all those around him. He touched the lives of many and will be greatly missed. Services will be held at Pierson’s Garden of Peace Chapel (16 Avenue & Garden Road/100 Street N.E., Calgary) on Thursday, October 29, 2015 at 1:00 pm.