You are here: Obituaries / Arthur Howard 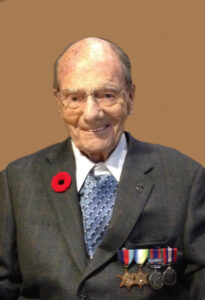 Arthur Howard passed away peacefully on Tuesday, March 1, 2016 at the age of 95 years in Calgary, AB. Art came to Canada with his parents Frank and Amelia Howard when he was 4 years old. Art was predeceased by his wife, Lillian, in 2013. He will be lovingly remembered by his children, Frank (Erlinda), Lynne (Franz) Nischt, Richard (Meridee), Ann (Bryan) Staples, and Steven; his grandchildren, Kimberly-Julia, Megan, Kristina, Michael, Alisha, Ryan, Tyson, and Andrea; and his 7 great-grandchildren. Art was predeceased by his grandson, Tyson. Art served with the Canadian Naval Services during World War II as a Morse Code Radio Operator. He was employed for 50 years with the Canadian National Canadian Pacific in Telecommunications. Art was sociable and well liked by everyone, gaining more friends when he moved from Montreal to Calgary. He enjoyed table games such as cribbage and bridge. He and his wife stayed active by swimming, cross country skiing, skating or lawn-bowling. Always ready to participate in group activities, he’d jump at the opportunity to play a part in a stage show. As well, he traveled extensively, locally camping in the great outdoors around North America and Europe. Whether he was taking in the sights from a cruise ship, walking the streets of Germany and Spain, or enjoying the view from the Great Wall of China; Art enjoyed life to the fullest. He never took anything for granted. He also served faithfully at St. Margaret’s Anglican Church in Montreal, QC and St. George’s Anglican Church in Calgary, AB.