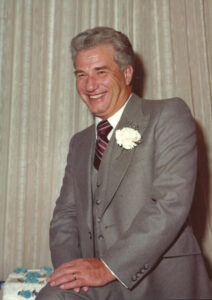 Arnold MacIsaac (1926-2014) Arnold passed away peacefully surrounded by his family on December 3, 2014. He was born in Abernathy, Sask to Andrew & Dorothy MacIsaac and moved to Rockyford, AB in 1935 where he lived until coming to Calgary in 1952. He worked at Great West Saddlery where he met Virginia Tautfest. They were married July 12, 1954. Arnold was employed by Sherwin Williams Paints for 27 years and retired from Northern Paints in 1992. He was pre-deceased by his wife Virginia and his siblings Agnes, Lillian, John and Norman.

Arnold was an avid Stampeders fan for over 50 years and also loved to golf and travel. He will be missed by his family and friends. Funeral services will be held on Thursday, December 11th at 1:00 pm at Pierson’s Funeral Service, 4121 17th Ave SE. In lieu of flowers, donations may be made to a charity of your choice.