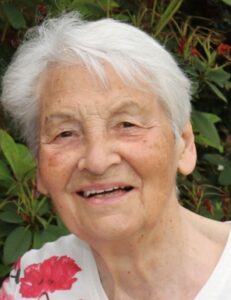 Annie Marie Louise Thebault, nÃ©e Brisset, passed away on Thursday January 21 in her 91st year. Annie is pre-deceased by her husband Armand (2008) and her great grandsons Callum (2016) and Jeremy (2017). She is survived by her six children, Christine, Brigitte, Philippe, Francis, GeneviÃ¨ve and Vincent, 14 grandchildren and 34 great grand children.

Annie was born, raised and educated in France. She became an accomplished pianist and organist and as a young adult was a church organist for one the largest Catholic Churches in her native city of Niort. She was married in 1952 to Armand Thebault, a policeman and the couple moved extensively around the western part of France. They went on several business ventures together from managing a Coop store to owning 3 cinemas. In 1971, they joined the Church of Jesus Christ Of Latter-day Saints and decided to emigrate to western Canada with their 6 children. In Calgary, Annie worked for the Red Cross and Berlitz school where she taught French and created her own method of teaching. Annie and Armandâ€™s love of adventure and change took them to Montreal, Vancouver island, Cardston and Calgary. They served a 2 year mission together in Mauritius island for the Church. Annie loved visiting her children and she travelled, often by herself, to Pakistan, India, Singapore, Indonesia, Scotland, England, Malta and Switzerland. But her favourite place always remained her beloved native land. Over the last 30 years, Annie became an avid genealogist and added in excess of 28,000 relatives to her family tree. She thrived in the company of her children, grand children and great grandchildren who love her dearly. She remains a great example in her faith, endurance, love for God and her Savior Jesus Christ and her love of family. An example that her descendants will treasure in their heart forever.

No public service will be held. Private family graveside services will be held at a later date.