You are here: Obituaries / Anne Maruska 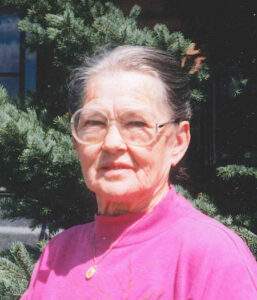 Maruska, Anne (nee Seidle, Formerly Kubota) July 9, 1914 – December 28, 2013 Anne Maruska passed away on Saturday, December 28, 2013 at the Mayfair Care Centre at the age of 99 years. She will be dearly missed by four children James Kubota of Cochrane, Edward Kubota, Edna Magee and Richard Kubota, all of Calgary; 14 grandchildren; 29 great-grandchildren; and 4 great-great-grandchildren; brother Edward Seidle (Joan) and sister Amelia Schulkowski (Ed), all of Medstead, SK; and many other relatives and friends. Anne was predeceased by her husband Joseph Maruska in 1989; a son Ronald Kubota in 1971 and great-grandson Kirk. Anne was an ultimate Alberta pioneer. She was born and raised in Czechoslovakia. At age 15 and with only a grade 8 education, she immigrated to Raymond, Alberta in 1929 with her family. A few years later she married Takayuki Kubota and they started raising their family of 5 children. In 1958 she married Joseph Maruska and they moved to Ontario for a short time prior to settling in Red Deer. After Joseph’s death, she moved to Cochrane to be closer to family. Anne was a great homemaker and will be remembered as a great cook, a remarkable seamstress and a gifted vegetable gardener. She will be missed by her family who love her dearly. A Funeral Service will be held at Pierson’s Forest Lawn Chapel (4121 – 17 Avenue SE, Calgary) on Friday, January 10, 2014 at 2:00 pm. Further services and interment will take place in North Battleford, Saskatchewan. Messages of condolence may be forwarded to the family at www.piersons.ca.