You are here: Obituaries / Anne Cameron 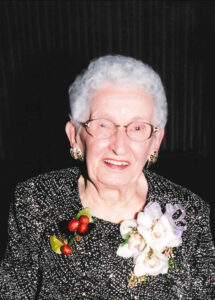 Anne Cameron passed away on Wednesday, August 26, 2015 at the age of 91 years. She was predeceased by her husband John Duncan Cameron, March 29, 1986, parents John and Alice Kaluk, both in 1982, sister Jean Hawkins in 2003, brother-in-law Dave Hawkins and sister-in-law Lois. Anne is survived by her brothers Albert Kaluk, of Burnaby, B.C., Julius Kaluk (Joan) of Wynyard, Sask. and Leslie Kaluk of Surrey, B.C.; a brother-in-law Dave Hawkins of Kamloops, B.C.; and many nieces and nephews. Anne was born and raised in Wynyard, Saskatchewan. She moved to Saskatoon and worked for the T. Eaton Co. for 14 years. In 1956 she came to Calgary where she married John Cameron. She worked for Home Provisioners Campbell and Griffin for 18 years until retiring in 1974 to look after John. Anne has made many good friends in Calgary. She has participated and volunteered with the Greater Forest Lawn Seniors Centre and the Seniors Casino. Her warm smile and cheery countenance will be missed by all who knew her. A Graveside Service will be held for Anne at Rocky View Garden of Peace Cemetery (243208 Garden Road NE, Calgary) on Wednesday, September 2, 2015 at 10:00 a.m