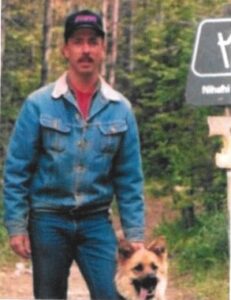 Andrew was born on January 27th, 1961 at the General Hospital in Calgary, Alberta. As a child he was adventurous and mischievous, a real sh**-disturber when the opportunity permitted itself. Growing up, Andrew enjoyed riding his bike, fixing cars, hiking and camping, and driving around in his truck to help people out after a big snow. It was during his childhood that he met Ian Cooper, Cory Thurber (Corey Thurber) and Jim McArthur (Cheryl McArthur). These men were more than friends to Andrew, they were his brothers. If you ask anyone of them, they will say he was a truly loyal friend.

As a member of DeMolay with Calgary Chapter, he met Shawnda, his future wife and soul mate. They only dated a short time before he proposed. Thirty-five years of marriage and two girls later, they were still completely in love. Andrew was an incredible father and would do anything for his girls. He was so thankful to have reconnected with his eldest sister, Susan Warthe, and her family. He was a loving Uncle to his nieces and nephews and loved â€œall his kidsâ€ biological or not. He loved to pass along his wisdom to them at any opportunity and always insisted that if you were to take something on, it had to be done right the first time.

For over forty years, he worked on the oil rigs, starting as a mud-logger and working his way up to become a Well Site Geologist. He found rocks and minerals fascinating and had an innate talent for geology. He loved navigating his way to the site locations through back roads and was eager to explore the provinces and countries that his work led him to. He relished in the opportunities his job gave him to travel to Pakistan, the Arctic, and all-around Canada, especially the East Coast. During his time with Crestar, in 1999, he met Wayne Dwyer and they quickly became thicker than thieves. Wayne and his wife Lynn Woolston were great travel companions of Andrew and Shawnda and they soon became more than just friends, they were family.

He loved music – all music, James Taylor, Colin James, Garth Brooks and Willie Nelson to name a few. Working on his â€™67 Mustang and â€™70 Ford XL, model trains and playing the guitar were some of his favourite hobbies. He had a deep respect for nature and was a skilled outdoorsman. He loved all animals especially horses and dogs (Sandy, Tess, Casey aka Danger Boy and Lexa). When the Boston Bruins or Calgary Stampeders were playing, he never missed a game. He lived his life through movie quotes and if you ever needed a movie recommendation, joke or just a good laugh he was your guy. His dream was to build a house with Shawnda and retire on their property out in Sundre. He put his heart and soul into that land.

He had a way of making you feel at home whether you knew him for five minutes or fifty years. You always felt safe in his presence and, even without words, knew you were protected. He had a colourful vocabulary at the best (and worst) of times. He was the hardest-working man for himself and especially for his family. He was honest to a fault. Donâ€™t ask if you donâ€™t want to know. He was rough and tough on the outside but ultimately, he had the kindest soul, steady and true and was a cowboy through and through.

He leaves behind many dear friends and family, a list too long to name. Our time together was too short, and he will be forever missed by his wife and the love of his life, Shawnda; his two girls Kassandra and Megan who loved and adored their father; and their significant others, Cory and Spencer (respectively) who respected and admired the man that he was. Andrew Elton Duffell passed away at 7:06pm on January 4th, 2021 at the age of 59. It was his final phone call to his girls, and as always, it was right on time.