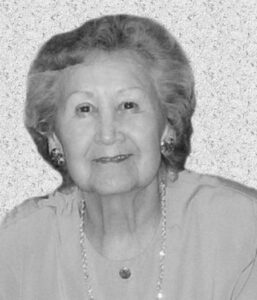 Alyce Parisien, lovingly known as “Nan,” quietly passed away surrounded by her family on January 7, 2014 at the age of 86 years. Nan is survived by her daughter Sharon (Peter) Braglin ; brother Stanley; five grandchildren, Keith (Carol), Craig (Terry), Drew (Joan), Brent (Rhonda) and Iva (Lawrence) Serfas; 11 great-grandchildren, Clinton (Eileen), Candace, Tyler, Brody, Melissa (Max), Cynthia (Dustin), Adeline, Kevin, Anna, Tyler Serfas and Alexis Serfas; four great-great grandchildren Maddox and Jaxson (Cynthia), Lucas and Aria (Clinton); and many more family and friends. She was predeceased by her husband Ronald, son Richard, two brothers and first husband Roderick LaRocque. Nan was born in Regina, Saskatchewan on March 26, 1927. She met Roderick and they were married in a triple wedding ceremony with Roderick’s two brothers and their wives in Labret, Saskatchewan. By 1951 the couple had welcomed two children, Sharon and Richard, into their lives. After an amicable split from Roderick, Alyce met and married Ron “Rookie” Parisien. Alyce and Ron’s life together was full of travel and fun leading them to live in many cities along their way. After Ron’s passing, Nan lived with daughter Sharon and Peter in Chestermere. Nan’s greatest pleasure was being surrounded by her grandchildren and great-grandchildren. Nan was loved deeply and will be greatly missed by her family and friends. A Visitation will be held for Nan at Pierson’s Forest Lawn Chapel (4121 – 17 Avenue SE, Calgary) on Sunday January 12, 2014 from 6:00 – 8:00 pm. A Funeral Service will be held for Nan at the same location on Monday, January 13, 2014 at 10:00 am. Messages of condolence may be forwarded to the family at www.piersons.ca.