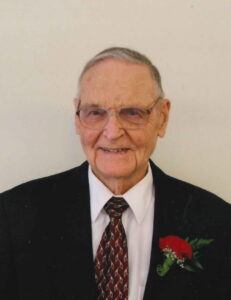 Allen Hampshire passed away on Tuesday, March 16, 2021 at the age of 102 years. He will be lovingly remembered by his children Alyson Lefler-Kloosterman (Cor), Sheryl Allen (Craig), Dale Hampshire (Carla), Lynn Skinner (Jim) and Crystal Sager (Ric); daughter-in-law Ellen Hampshire-Krueger; 21 grandchildren; 44 great grandchildren; brother George Hampshire; and many more family and friends. He was predeceased by his first wife Laurabelle, second wife Helen, son Neal and brother Johnny.
Allen was born in Stettler, AB and raised in Northern Ontario. Allen loved life on the family homestead but answered the call and joined the military to serve in WWII, in England. Following the war, he returned to Fort Frances, ON where he met and married Laurabelle Lamb. They started their family in Fort Frances, but eventually moved to Brantford, ON where they continued to raise their five children. While in Fort Frances, Allen and Laurabelle were introduced to, and became members of the Church of Jesus Christ of Latter-day Saints. Throughout Allen’s life he served faithfully in many callings in the church. He was a Branch President, member of the High Council, and was called to be a Patriarch. With his wife Helen, they served as missionaries in North Carolina and worked at the Toronto Temple, where Allen had the opportunity to preform many marriages.
In the late 1940â€™s, before it was a popular practice in Canada, Allen learned the art of Massage Therapy and Reflexology. While working fulltime for Massey Ferguson, he practiced massage therapy in the evenings until he was able to have his own fulltime practice. Allen found the most joy in helping others.
Upon Helenâ€™s passing, Allen moved to Calgary to be closer to his children where he has lived for the past 8 years. He will be remembered as a loving husband, father, grandfather, great-grandfather, brother and friend. Allen’s family would like to express their gratitude to the staff at the Journey Club at Westman Village and the caregivers of Nurse Next Door for their kind and compassionate care.
A Funeral Service will be webcast for Allen on Friday, March 26, 2021 at 11:00 am. To join the webcast, please click on the link below. If friends so desire, donations may be made to the Canadian Cancer Society (www.cancer.ca).