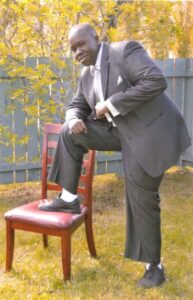 Abiem Kuol Akel Abiem was born on March 26, 1993 in Alexandria, Egypt. Abiem and his family then immigrated to Canada in 1997 where he quickly adapted to the Canadian culture. Abiem was a big fan of wrestling especially WWE. He also enjoyed wrestling with his brothers, sister, and friends. Another one of his favourite things to do was watch anime, especially Dragon Ball Z and play video games. He also really enjoyed walking and working out. As a Christian, he possessed many important Christian values. The main ones to personify him would be his Loyalty. Abiem’s loyalty was unmatched. He was a very courageous man; he was not scared of anything or anyone and always stood up for people and had their back no matter what. Last but never least was the love Abiem exuded. He cared about many people and people always fed off his energy, that’s he best kind of human. Abiem passed away on Nov 11, 2016, Remembrance Day. That is the day we remember soldiers for their Courage, Loyalty, and Love for their people, and for that, we remember our Soldier, Abiem Kuol Akel Abiem. He will be terribly missed and never forgotten.